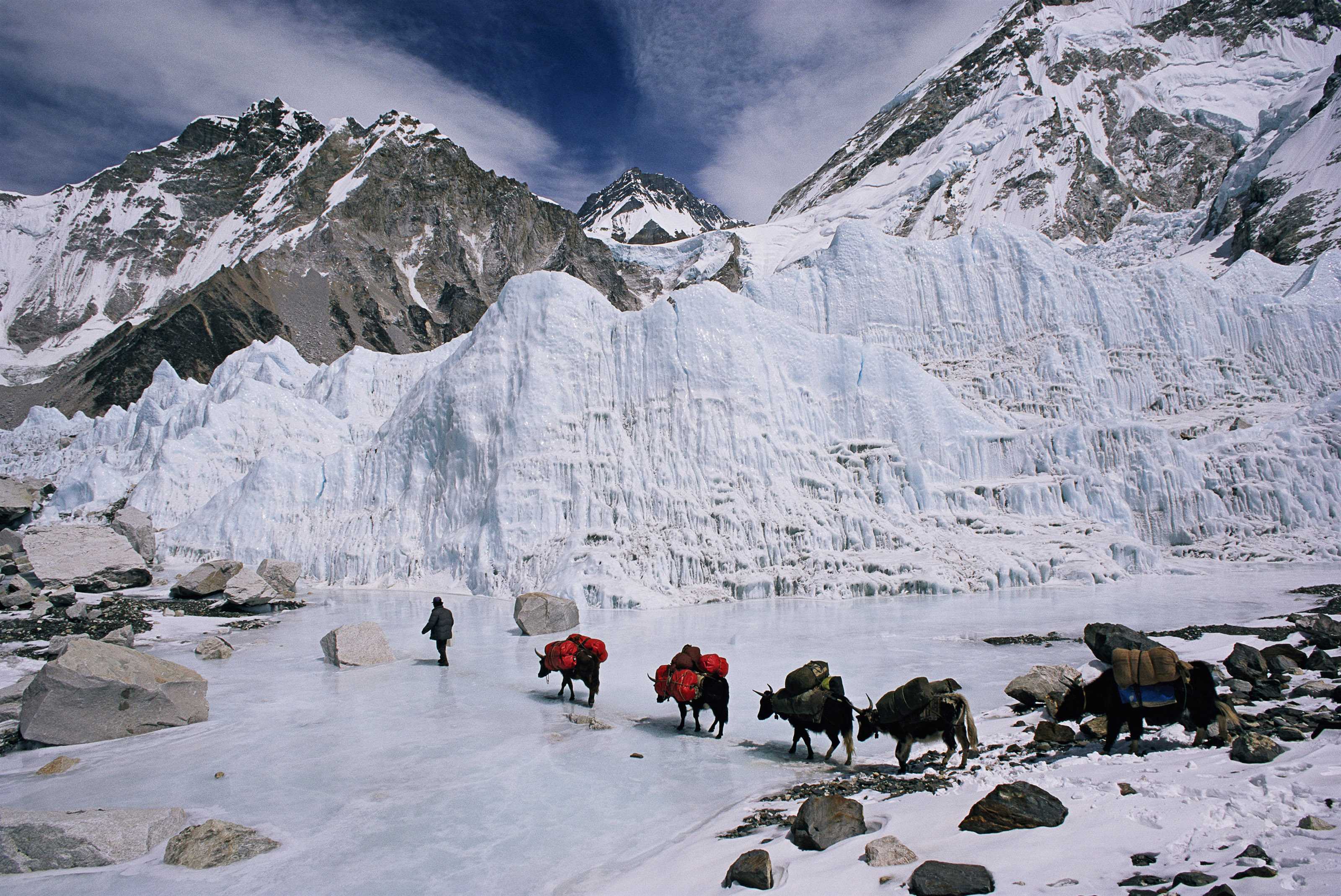 Trek in the foothills of Mount Everest and see the snow giant in all its glory. Suitable for the average walker, this short trek introduces you to the majestic Khumbu region and its rich Sherpa culture. The highest elevation this trek reaches is just above 3800m – which is quite comfortable if you get properly acclimatised at Namche, where you’ll be spending two nights. The day after your arrival in Nepal, a morning flight (given favourable weather conditions) will take you to Lukla, a small airport town which is the most common starting point for trekkers heading to the Everest region. From Lukla a leisurely walk through several villages and suspension bridges will take you to Phakding. After spending a night in Phakding, you’ll head to Namche and follow a trail that climbs gently up, before ascending a very steep final stretch, to reach Namche Bazaar.

Namche, the trading capital of the Khumbu region, was once the trading grounds of the “Saltmen of Tibet”. Even today we can see Tibetans selling rugs, clothing, salt and dried meat in the region. With karaoke bars, internet cafés, bakeries, shops, even pizzerias, the modern Namche has now become a “tourist-ghetto”. It’s very likely that you’ll hear half a dozen languages being spoken around you during your two day stay in Namche.

Two nights in Namche Bazaar should acclimatise you for a further ascent to Tengboche, which, at 3867 meters is the highest altitude you’ll be reaching. From Tengboche you’ll see a wonderful panorama of Mount Everest and it’ll certainly be one of the best experiences of your life. In Tengboche, you’ll also visit the grand Tengboche monastery, the highest ever place of worship that basks in the solitude of a beautifully scenic valley. The next day, you’ll return to Namche Bazaar and the following day you’ll return to Lukla. The same scenic flight that brought you to Lukla from Kathmandu, awaits you in the tiny airstrip there. The return flight to Kathmandu marks the end of your 9 day trekking adventure in Nepal.

After breakfast, transfer to the Domestic Airport for the Trans Himalayan flight and dramatic landing on the hillside at Lukla: gateway to the Khumbu/Everest region. Meet your local porters and walk downhill to the Sherpa settlement of Cheplung. The trail then follows the side of the Dudh Koshi Valley before ascending to Ghat (2,530m/8,350ft). Another gentle hour leads up to Phakding.

Overnight in Phakding at Lodge

The trail meanders through pine forest, along the Dudh Koshi River, crossing suspension bridges via the Sherpa villages of Benkar, Chumoa, Monjo and Jorsale: entrance to the Sagarmatha National Park and permit checkpoint; with tranquil views of glistening Thamserku (6,618m/21,714m). The trail continues along the riverbed to the confluence of the Bhote and Dudh Koshi Rivers. It then climbs steadily, crossing the high Tenzing- Hilary suspension bridge: with inspiring glimpses of Everest and the Nuptse – Lhotse ridge. A final three hour ascent through pine forest leads to the prosperous trading and administrative town of Namche Bazaar.

Overnight in Namche Bazaar at Lodge

This is a scheduled acclimatization day on the trek. Acute Mountain Sickness (AMS) and health experts recommend a stop for at least one extra night. Be active and roam rather than laze around: climb high and sleep low is the acclimatisation advice.

Take an entertaining side trip to the large traditional Sherpa village of Khumjung (3,780m/12,402ft): with fine views of Thamserku, Kangtega, Ama Dablam and Everest – in a sea of lesser peaks.

Return to Namche Bazaar for the night.

An alternative five hour walk northwest of the town, to Thame (3,820m/12,533ft) below the impressive 6,187m/20,300ft Kongde Ri ridge, offers panoramic Himalayan views not seen on the EBC route.

The trail climbs up from the town and then contours around the hillside, offering superb views of Everest, Nuptse, Lhotse, Ama Dablam and closer views of Thamserku. It then undulates to Kyangjuma and on to Sanasa where the trail forks; left for the Gokyo Lakes and right for Everest Base Camp. Look out for spotted deer, musk deer, Himalayan Tahrs and birds – including the colourful (male) Danphe pheasant (Nepal’s national bird).

We fork left and ascend along the lower slopes of Khumbila continuing up the Dudh Koshi Valley. Khumbila is sacred to Sherpas as the abode of the patron-god of the Khumbu region. The path rises steeply to the tiny village of Mong La (3,975m/13,042ft): built around an ancient chorten. It then drops to the river at Phortse Thenga, through pine and rhododendron forest, crosses and rises up, past walled fields of crops, to Phortse, below the snow peaks of Taboche and Cholatse.

Overnight in Phortse at Lodge

Follow breakfast with a hard but short climb and then trek steadily along a ridge. Drop into the Imja Khola Valley, cross the Imja Khola and ascend through dwarf conifers and rhododendron forest to the hilltop village of Tengboche: on the Everest Base Camp trail. Their famous Gompa is set against the backdrop of Ama Dablam, Nuptse, Everest, Kangtega and other peaks. At full moon in October/November they hold the colourful Mani Rimdu festival which includes masked dancing and Tibetan Opera in the monastery courtyard. Visit the monastery during the afternoon.

Overnight in Tengboche at Lodge

The day begins with a long meandering descent through hillsides blanketed with rhododendron and juniper trees. After crossing the flag festooned bridge over the Dudh Koshi at Phunki Thenga (3,250m/10,663ft), the lowest trail-point north of Namche Bazaar, the path rises to reach Sanasa where we turned off for Phortse. Return on the broader trail, eventually passing a Chorten, the army camp and on to Namche Bazaar.

Overnight in Namche Bazaar at Lodge

From Namche, the trail descends to more comfortable altitudes, passing through the friendly farming villages of Jorsale (where we exit the National Park), Monjo, Phakding, then crosses the suspension bridge at Thado Koshi before rising to Ghat and Cheplung. Round off the adventure with the final 700m, 35min ascent to Lukla: and say goodbye to your porters.

Overnight in Lukla at Lodge

Day 8: Flight from Lukla to Kathmandu.

Again, 40 minutes of pure mountain experience on our flight to Kathmandu marks the end of our journey. 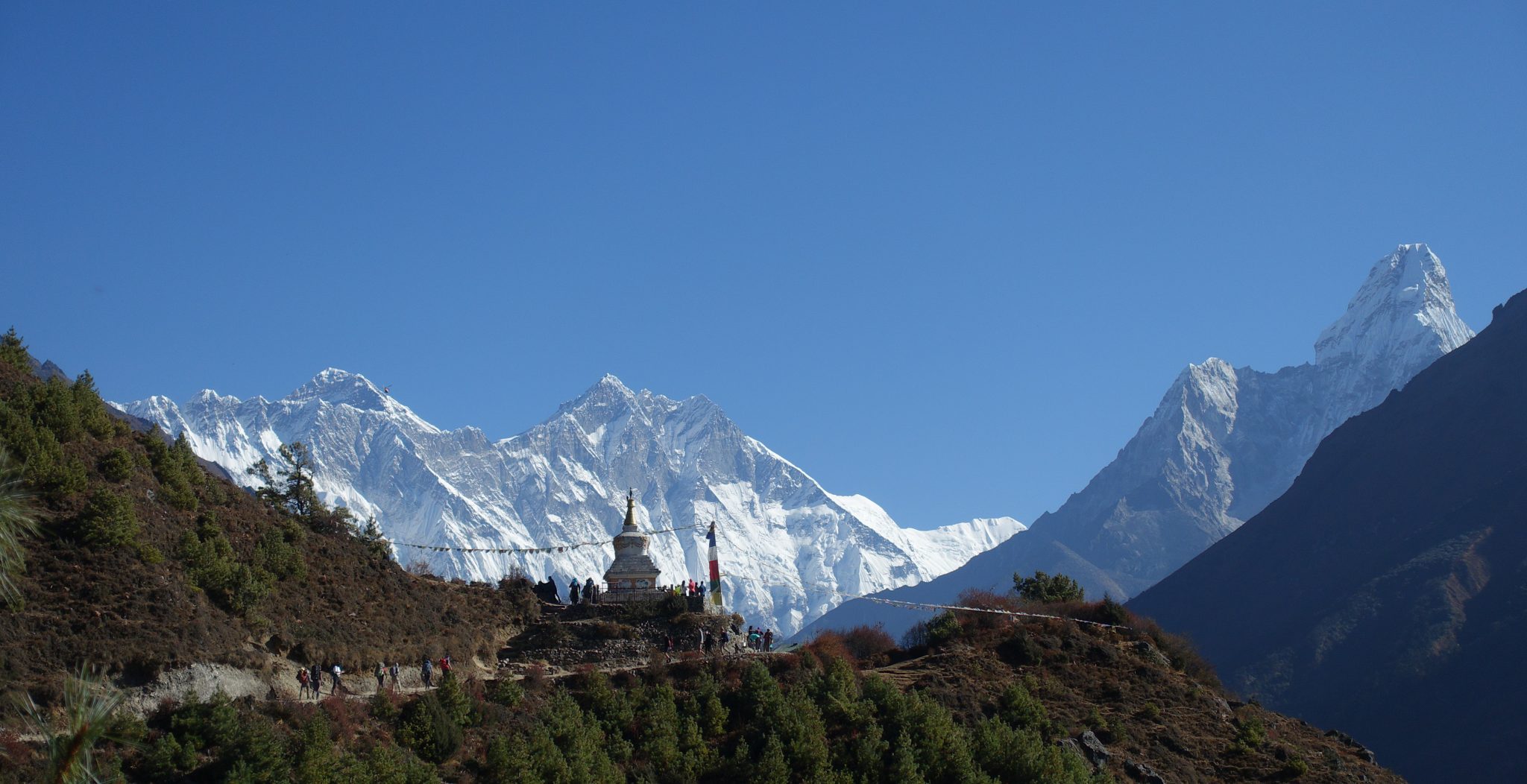 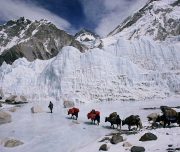 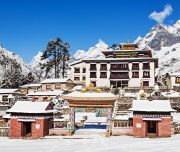 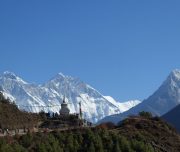 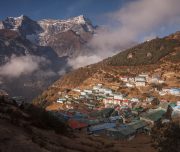