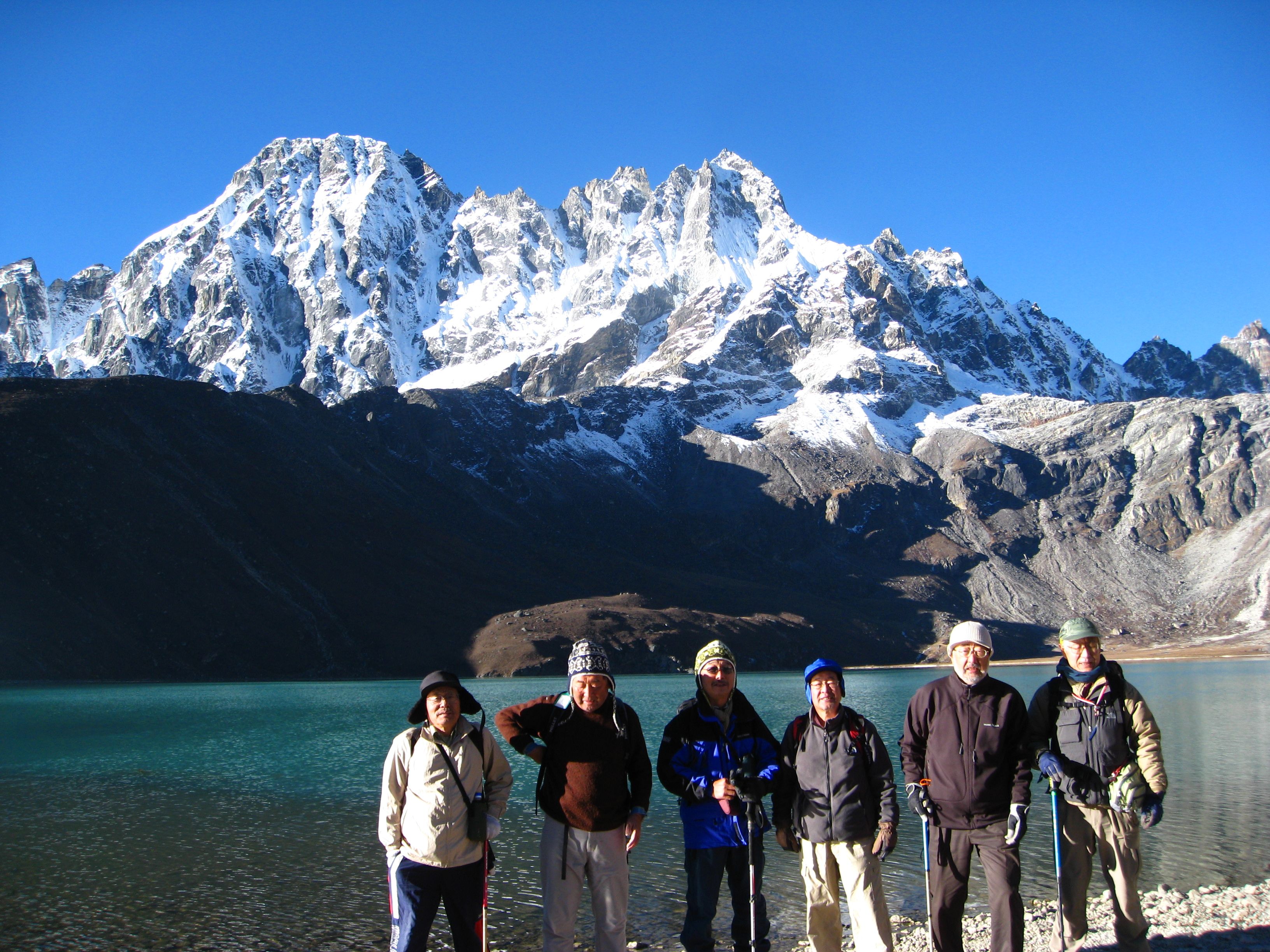 Gokyo Lake is situated in Khumbu/Everest region which is considered as most sacred holy place by both Hindus and Buddhist devotees. Gokyo Lake Everest Trekking is very famous among all the domestic and international tourists and expedition lovers and for making the way towards Everest Base Camp. From the top of Gokyo, you will get the 360-degree view of beautiful world highest mountain peaks.

Gokyo Lake is located at the altitude of 4700 M to 5000 M above from sea level. Gokyo Lake is in Khumjung village of Solukhumbu district. Gokyo valley is one of the most stunning landmarks present in Khumbu region. In the Gokyo valley you will find Nepal’s biggest Glacier “Ngozumba” and many other glorious glacial lakes. From Gokyo you can see the breathtaking view of beautiful mountain peaks like Mount Everest (8,848 M), Cho-Oyu (8,201 M), Lhotse (8,516 M) and Makalu (8,481 M) and many more. This 14 days trek will gives you the wonderful feelings of being in the top of the world.

Trekking to Gokyo Lake is also the biggest opportunity to explore the rural lifestyle of Sherpa Community inhabiting in the route of Everest Gokyo Lake Trekking. The Unique traditions, cultures and spiritual connection of Sherpa peoples with the high Himalayas can be observed more closely via this trek.

Day 1: Arrival to TIA airport. Pick up from there then check in to hotel in Kathmandu Upon arrival in Kathmandu.

Our team member will be waiting outside the airport terminal a few meters from the exit door. Please check your name at Show card. He will bring you to hotel in Kathmandu. The drive from the airport to the hotel is around 20 minutes.After refreshment, we will brief your plan more visibly.

In the early morning we take the spectacular flight from Kathmandu to Lukla (2827m), flying parallel to giant Himalayan Mountains bordering Nepal and China (Tibet). The flight time is about 40 minutes and we land at an airstrip built by Sir Edmund Hillary and the Sherpas in the mid-1960s. After landing we have time to explore the village while our Sherpa crew sort and load our trekking equipment. In the afternoon we begin our trek by descending towards the Dudh Kosi River where we join the main trail to Namche Bazaar, located just above Chaunrikharka (2713m) at Thalsharoa (2680m). The walking is easy and after passing through the many small village like, chheplung, Thadokoshi goon, Nurning ,chhuthaea, Dukdingma(2492m), it is a short walk to Phakding.

From Phakding we cross the river and head up the valley, following porters from the south that is ferrying supplies to Namche Bazaar. The trail keeps close to the river valley and is lined with beautiful blue pine and rhododendron forest that is very spectacular in the spring months, when the flowers are in bloom. We cross the Dudh Kosi River at Benkar, where there are tantalizing glimpses of the snow-capped peaks of KusumKanguru (6369m) and Thamserku (6623m). From here it is only a short walk to Monjo (2835m), where we arrive in time for lunch. In the afternoon the walking is a little tougher and includes the steep ascent to Namche Bazaar. From Monjo it is a short walk to the entrance of the national park, before we cross the Dudh Kosi River to Jorsale(2805m). The trek continues upstream on generally flat terrain, crossing back to the right bank to the confluence of the Bhote Kosi and Dudh Kosi Rivers, where we start the steep climb to Namche Bazaar. After crossing a large and stable suspension bridge high above the river, we slowly ascend at a steady pace. There are some fantastic photographic opportunities from the top, as the peaks of Mt. Everest, Lhotse, Nuptse and Taweche. Come into view for the first time.

The last Population had counted nationwide in AD. 2011, Namche has households: 480 & population: 1,540.We remain at Namche Bazaar for a second night to allow for proper acclimatisation to the altitude. Namche is a prosperous village situated in a large protected hollow. It gained its importance during the period when Tibetan salt was traded for the lowland grains of Nepal. Today a limited amount of trade still exists at Namche and Tibetans are often seen in the village trading rugs and Chinese-made goods, clothing, salt and dried meat. It is recommended that you take the opportunity to see both the sunrise and sunset views from the national park headquarters above the village. The stunning vista includes a superb panorama of the Khumbu peaks and great views of Everest. After breakfast, a variety of options exists. Perhaps a walk towards Thami (3810m) above the beautiful BhoteKhola River Valley or a visit to the national park headquarters to see the interesting displays of Sherpa lifestyle and culture. There is also a mountaineering display and information on the park’s flora and fauna. Your guides are one hand to offer advice and escort you on walks.

The trail climbs up from the town and then contours around the hillside, offering great views including Everest and Khumjung. It then ascends along the lower slopes of Khumbila, branching northwest of the Everest trail and continuing up the Dudh Koshi Valley. It climbs steeply to the tiny village of Mong La (built around an ancient chorten), then drops to Phortse Thenga before climbing through a pine and rhododendron forest and on up to Dole – from where there are marvellous views of snow capped peaks. Look out for spotted deer, Himalayan Tahrs and birds – including the colourful (male) Danphe pheasant (Nepal’s national bird).

Overnight in Dole at Lodge

Today calls for a slow walk along this high trail. It climbs, through thorny alpine scrub, to scenic ridges above the river. Breathtaking views of Cho-Oyo, Thamserku and Kangtega are countered by charming views into the valley below where we pass summer-grazing hamlets such as Luza that lead up to Machhermo. The Machhermo Khola flows through the village of Kyajo Ri and Pharilapche before draining into the Dudh Koshi. This is the last settlement before Gokyo and has a HRA aid post for victims of AMS.

Overnight in Machhermo at Lodge

The trail rises gently from the village to a ridge that offers the first views of the north face of Cho-Oyo (8,210m/26,907ft) and more views of Kangtega and Thamserku. Ahead in the valley is the snout of the Ngozumpa Glacier: the trail drops back towards the river. At the hamlet of Pangka it meets an alternative route from the south before climbing onto the side of the moraine. A metal bridge crosses the edge of the frozen Longponga Tsho (4,690m/15,383ft): the first of the Dudh Koshi’s six sacred lakes. Before Taboche Tsho, a path leads up onto the glacier – and the Cho La. A strenuous half hour’s walk beyond the lake is the summer village of Gokyo set on the side of the moraine and overlooking the blue-green Dudh Pokhari which nestles in a semi circle of high peaks at the foot of Gokyo Ri. Cho-Oyo and the ice ridge to Ghyachung Kang, from which the Ngozumpa glacier flows, are clearly visible behind ridges.

Overnight in Gokyo at Lodge

Day 9: Gokyo: Acclimatisation and exploration of the Gokyo Valley

The first is Gokyo Ri (5,360m/17,586ft) which begins on the northern side of the lake, opposite the village. Its panorama invites an early start and involves a two hour climb to its summit. It overlooks the broad, rubble-covered Ngozumpa Glacier, Nepal’s longest, gouged out beneath a wall of towering peaks on its south-eastern flank. From the flag bedecked summit is the unforgettable vista of the Himalayan chain that includes Cho-Oyu and Ghyachung Kang, the north face of Everest, Lhotse, Nuptse, Makalu, Cholatse, Taboche, Thamserku, Kangtega, Kusum Kangru (all over 6,300m/20,670ft) and many more, some unnamed.

The second attraction explores the fourth to sixth lakes north of the village. These lakes, together with melt water from the glacier are the source of the Dudh Koshi: followed from Lukla.

A trail rises gently, for three kilometres, north of the village to Thonak Tsho (4870m/15980m), the Ngozumpa Tsho (4,980m/16,340ft) and Scoundrel’s viewpoint (5,000m/16,405ft). From here there are tremendous close-up views of Cho-Oyu, Ghyachung Kang, Everest, Lhotse, Nuptse and Makalu. Approximately two hours is needed for the 200m descent back to Gokyo. If there is time, continue north along the path to the Cho-Oyo Base Camp at the northern end of the sixth lake; the Gyazumba Tsho.

Return to Gokyo for the night

Rather than retrace the upward route, follow the eastern side of the valley to gain different views of Khumbila. This path also offers warmer weather, as the sun stays on these slopes longer in the late afternoon.

Overnight in Phortse at Lodge

A slippery trail descends from Phortse to the bridge at Phortse Thenga and then rejoins the original route from Khumjung. It is easy to reach Namche Bazaar and then descend to the Dudh Koshi for a lower final night.

Overnight in Monjo at Loge

After breakfast retrace your steps to Phakding, cross the suspension bridge at Thado Koshi, walk on to Cheplung and round off the adventure with the final 700m/2,300ft, 35min ascent to Lukla: and say goodbye to your porters.

Overnight in Lukla at Lodge.

After an early breakfast, take the return flight to Kathmandu. Transfer to your hotel. Rest of day free.

Overnight in Kathmandu at Boutique Hotel with breakfast

Transfer to Tribhuvan International Airport for your onward flight to your next destination. 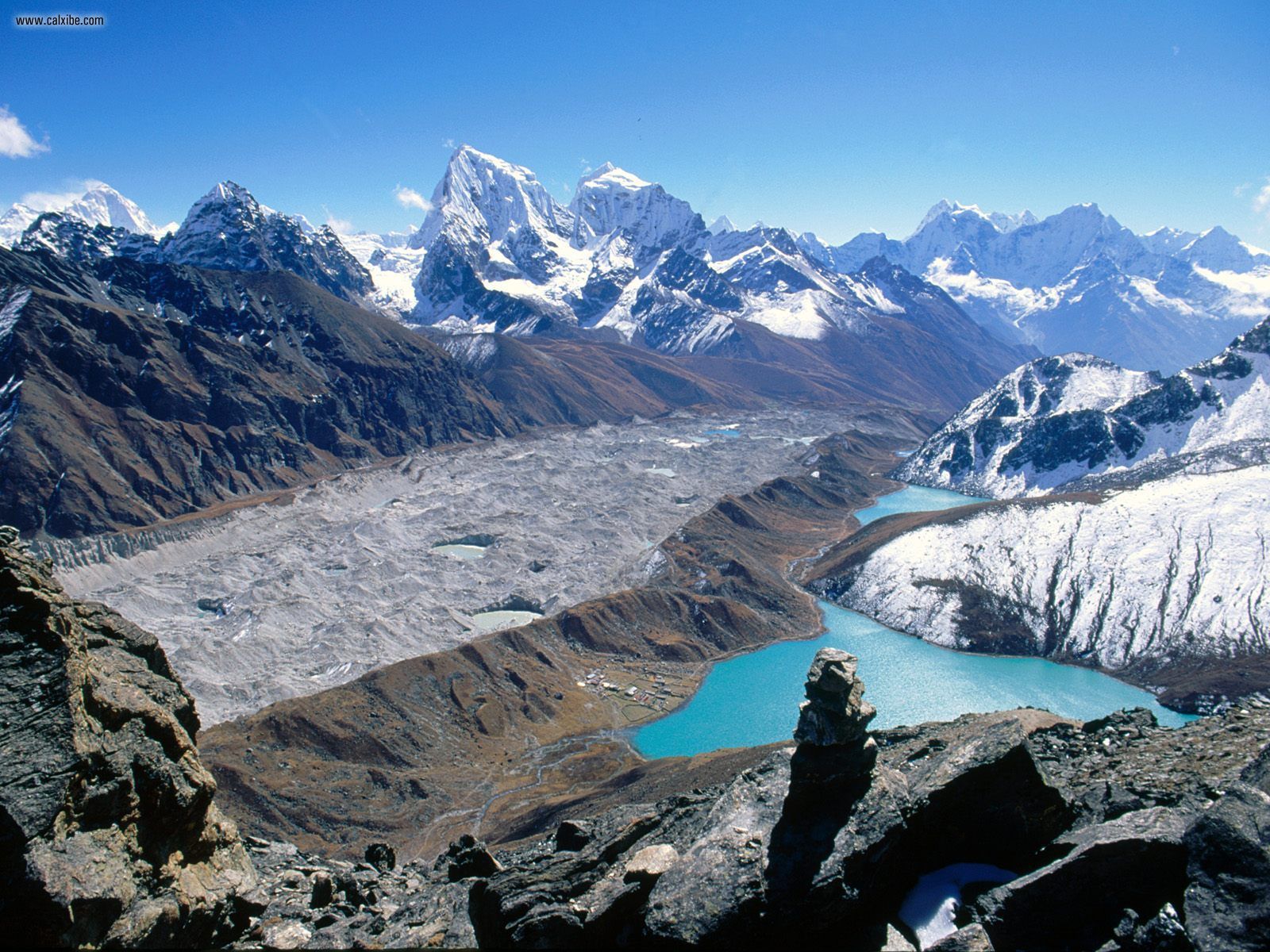 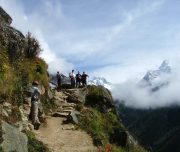 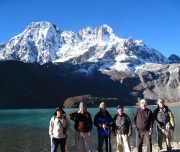 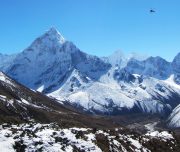 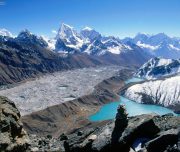