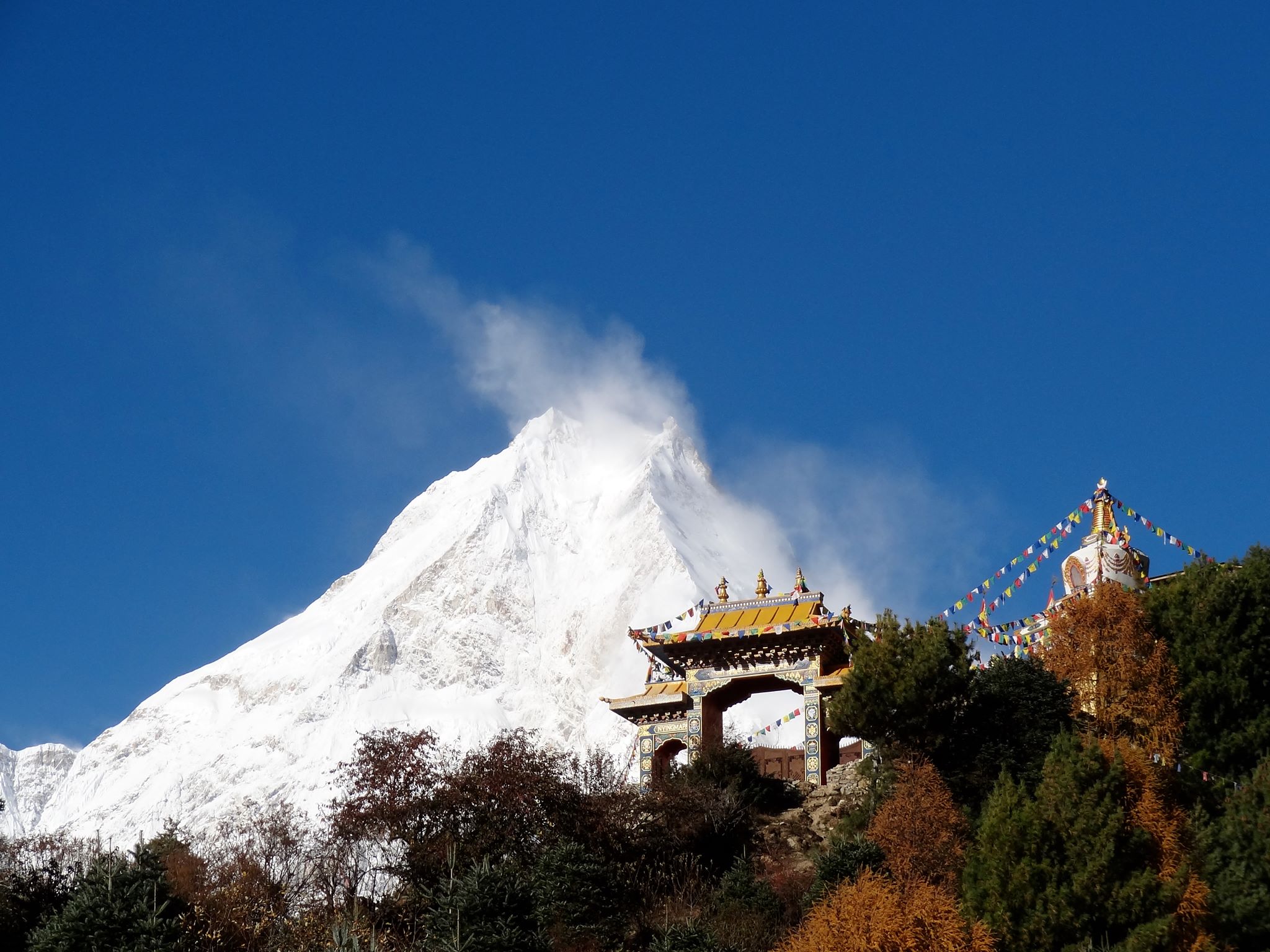 The Tsum Valley lies along the border with Tibet, just south of Tibet’s Shisha Pangma (8,046 m/26,400 ft). It is one of the most secluded valleys in the Himalayas and nestles beneath the Ganesh, Shringi and Boudha Himals. It was opened to trekking in 2008.

Its friendly people, the Tsumbas, are of Tibetan origin, speak an ancient dialect and have a unique culture and form of Buddhism. A form of polyandry is still practiced amongst some families – with all brothers in a family being married to one girl. These families tend to be wealthier than couples’ families. Goats, yaks and chickens are kept. Yaks provide transport for trade en route to Tibet.

Our Tsum valley trek passes Newar village of Arughat six hours by bus from Kathmandu. The trail gradually rises from village to village, over ridges, up the narrow Marsyangdi Valley to Philim and on to New Bridge where it splits: west to Manaslu, east to the Tsum Valley.

Highlights in the valley include the village of Chhekampar with its stone houses and slate roofs, Milarepa’s cave, Mu Gompa and Rachen Gompa to the south has nuns of the Ngak-pa sect. Gumba Lungdang is another important nunnery where trekkers are welcomed at the evening puja. Their 360o views are amongst the best on the trek. From the Gompa, a forest trail leads to the Ganesh Himal Base Camp: and superb views of the Ganesh Himal range to the west and Manaslu to the east with its surrounding peaks. From Gumba Lungdang, the downward return journey requires only four long but fairly easy days. We will overnight at different villages.

Day 1: Arrival and Transfer to Hotel in Kathmandu (1340m)

Upon arrival in Kathmandu, you are met at the airport and transferred to your hotel. Our airport representative will be waiting for you in the arrival hall, located after passing out of the customs area. Look out for your name in play card outside of arrival hall. The drive from the airport to the hotel is around 20 minutes.

A scenic drive west through the middle hills to Malekhu, then a secondary road to Dhading Besi and a 35 km dirt road to Arughat on the Budhi Gandaki River. This is a large Newar and Gurung village with many mango orchards. Then another 2 hrs drive upstream to Soti Khola.

Overnight in Soti Khola at Lodge

The trail undulates over ridges and passes waterfalls on a steep trail clinging to the side of a cliff. It then drops to pass rice paddies before climbing to the attractive Gurung village of Labubesi. Beyond, the valley opens out and the trail drops onto gravel banks along the river before rising to the village of Machha (Fish) Khola above the river – with good views of the 7,000 m/22,950 ft Ganesh Himal.

Overnight in Machha Khola at Lodge

The narrow trail follows minor ups and downs, often dropping to the gravel bar before crossing the Thado Khola and following a rocky ravine to Khorlabesi. After more moderate ups and downs there is a small hot spring at Tatopani. The trail then climbs a ridge before crossing the Budhi Gandaki on a suspension bridge. A good staircase, leads to a landslide before a final ridge to Dobhan.

Today’s trail follows the east bank to a 93m suspension bridge over the Yaru Khola, then climbs stone stairs up and back to the river before climbing to Thado Bharyang. Here it crosses to the west bank of the Budhi Gandaki, climbs a ridge and follows the river gently upwards to the village of Jagat. Walk on to Salleri, via a cliff-side trail – with views of Shringi Himal (7,187 m/23,580 ft) to the north. Descend to Sirdibas; and the first signs of Buddhist culture. Another suspension bridge leads to the east bank, and a tiring climb up to Philim: a prosperous Gurung village, the Chholing Sandu Gompa and surrounded by fields of maize and millet.

Traverse north of Philim, through forest up the narrowing valley to Ekle Bhatti. The trail then drops through a steep gorge under pine trees to a junction at New Bridge which leads to the Larkya La. To the right (east) a well-graded, exposed, zigzag track leads up through pines and rhododendrons, to Lokpa and the narrow lower Tsum Valley.

Then descend through beautiful forest, cross streams and circle under a bluff on the river before climbing steeply on well-made but exposed steps. Later, traverse steeply up through pines and rhododendrons, past a rock fall and later drop to Gumling and the Siyar Khola that drains much of the valley. Cross the wooden bridge and finally ascend the steep, narrow and exposed track to Chumling. The houses are classic Tibetan with barricades of firewood on the roofs: but built with sloping roofs to cope with the abundant rain and snow. They farm maize and potatoes.

Overnight in Chumling at Lodge

An easier day today! Cross the suspension bridge and new forest growing over a recent landslide. Higher up, pass gompas and superb views of the Ganesh Himal. Beyond Rainjam the trail drops to cross the Sarphu Khola that drains the Syakpa Glacier off Shringi Himal (7,101 m/23,298 ft) to the north. The trail then climbs, for some 2,5 hours , on well-graded but exposed track, to the Upper Tsum Valley and the linked villages of Chhokang and Paro, generally known as Chhekampar.

Here the valley broadens but the stone houses nestle under cliffs to make full use of the spacious fields for barley, maize, buckwheat and potatoes. Herds of tahr frequently graze the wild cliffs to the north; and if not watched can cause havoc in the fields. Himal Chuli (7,893 m/25,897 ft) can be seen to the west.

Overnight in Chhekampar at Lodge

A fairly short day today. First explore the linked villages and perhaps climb north to a retreat where Lama Kongdhog died after 26 years of meditation: the friendly people speak Tsumba, related to Tibetan, but little Nepali and are unused to visitors.

The trail passes through small villages and a local school, then rises to a ridge with chortens before passing through Lamagaon (3,020 m/9,909 ft). From here the huge courtyard of the Rachen Gompa nunnery is visible across the river. This is the female equivalent of the main Kathmandu Dopan Monastery.

Beyond the village of Burji a trail to the north leads to Milarepa’s Cave (Piren Phu – Pigeon Cave): one of the many places where the bringer of Buddhism to Tibet is reputed to have meditated.

Later, the trail crosses the Siyar Khola to join the trail from Rachen Gompa to Nile. There is an unusual round stupa before the impressive entrance gate to the large village of Chhule: where the children wear chubas and yaks abound. Further upstream, a bridge leads to the final climb to Nile.

Overnight in Nile at Lodge

Make an early start for the walk up to Mu Gompa, through dry Tibetan countryside – with rows of chortens and broadening mountain vistas. The ancient monastery houses over 100 monks. On three sides are tantalising views of the Tibetan border – with three passes frequently used for trade by the Tsumbas just out of sight. There are extensive seasonal yak pastures, the Lungdang Glacier to the east and high peaks in all directions. If time, include a visit to the Dephyu Doma Nunnery (4,000 m/13,100 ft) to the west.

On the return route trek it is possible to visit the Rachen Gompa (the older sections are the most interesting) from Phurba and rejoin the trail to Chhekampar at Ngakyu Leru.

Overnight in Chhekampar at Lodge

Retrace the trail to the small gompa at Gho, then drop south to a wooden bridge over the river and continue to Dumje: which has a Tibetan herbal medicine clinic and school. The track then leads up steeply, through pines and rhododendrons to a mani wall, after which it traverses along an exposed route, before zigzagging up through huge silver pines to the gompa perched on a ridge. The mountain views in all directions are fantastic: this is likely to be a highlight of the trek.

This small gompa with 40 nuns: who each stay in a small cell, has an intense and engrossing puja from 18.00-19.30 each night. Visitors are invited to attend and permission may be obtained to camp in the gompa forecourt and use their kitchen and ablution facilities.

Overnight in Gumba Lungdang at Lodge

Circle from the gompa past the nuns’ housing, and zigzag down to a lower indistinct track: follow it through the forest and cross the wooden Lungdang Khola bridge. Climb steeply through pines and rhododendrons and across a kharka up to a ridge. Continue up a birch-lined creek-bed and emerge onto grassy flats east of the Torogumba Glacier’s lateral moraine. Continue past yak huts to a track up the moraine wall that gives superb views of the cirque of mountains. The Ganesh Himal Base Camp (4,200 m/13,780 ft) is about here (4 hrs). Return to Gumba Lungdang in time for the evening puja.

Overnight in Gumba Lungdang at Lodge

Descend the trail to Dumje, cross the Lungdang Khola and take the south bank trail down the Siyar Khola that climbs over deep gorges and cantilever bridges to the high fertile valley of Ripchet. Several chortens adorn barley and buckwheat fields that have been cut from surrounding pine forests. Steep stairs lead down to Gumling on the river before the trail climbs through temperate forest to Lokpa.

Overnight in Lokpa at Lodge

After breakfast, our trail returns to Philim for lunch. Continue downhill to the suspension bridge and river bank trail to Sirdibas while enjoying the reverse views.

Overnight in Sirdibas at Lodge

Our trail now descends from the alpine Buddhist region back to the greener subtropical biome via Jagat, Yaruphant, Dobhan, Tatopani and then undulates to Khorlabesi – with time to linger along the way.

Overnight in Khorlabesi at lodge

The trail crosses the Tharo Khola flowing in its rocky ravine. Drop down to the river and traverse to the village of Machha Khola. Walk along the Budhi Gandaki Nadi to reach the Gurung village of Labubesi. Pass the two waterfalls on the steep cliffside trail to Khursane. Then follow the ridge above the Budhi Gandaki, through Sal forests to the bridge before Soti Khola.

Overnight in Soti Khola at Lodge

From here we drive, down the Budhi Gandaki Valley to Arughat and on to Kathmandu; with lunch on the way. Transfer to your Hotel, and a free afternoon.

Transfer to Tribhuvan International Airport for your onward flight to your next destination. 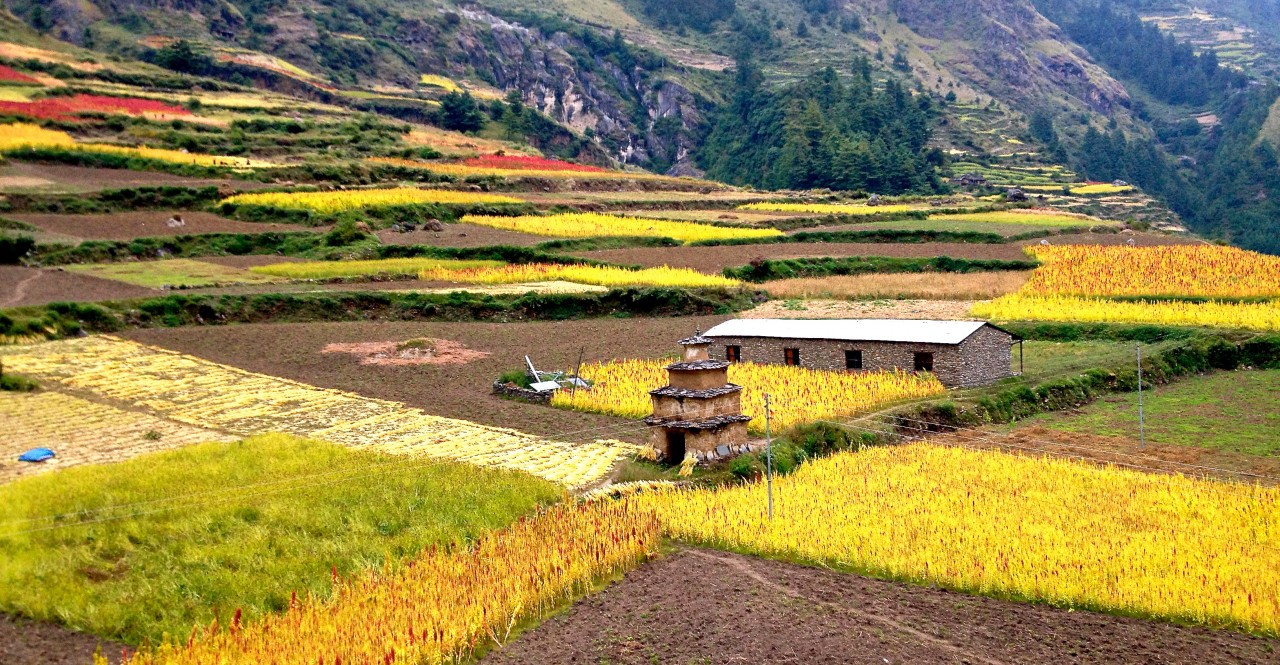 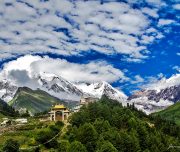 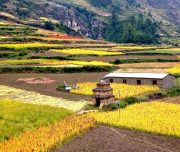 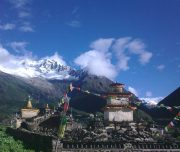 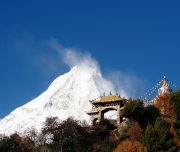