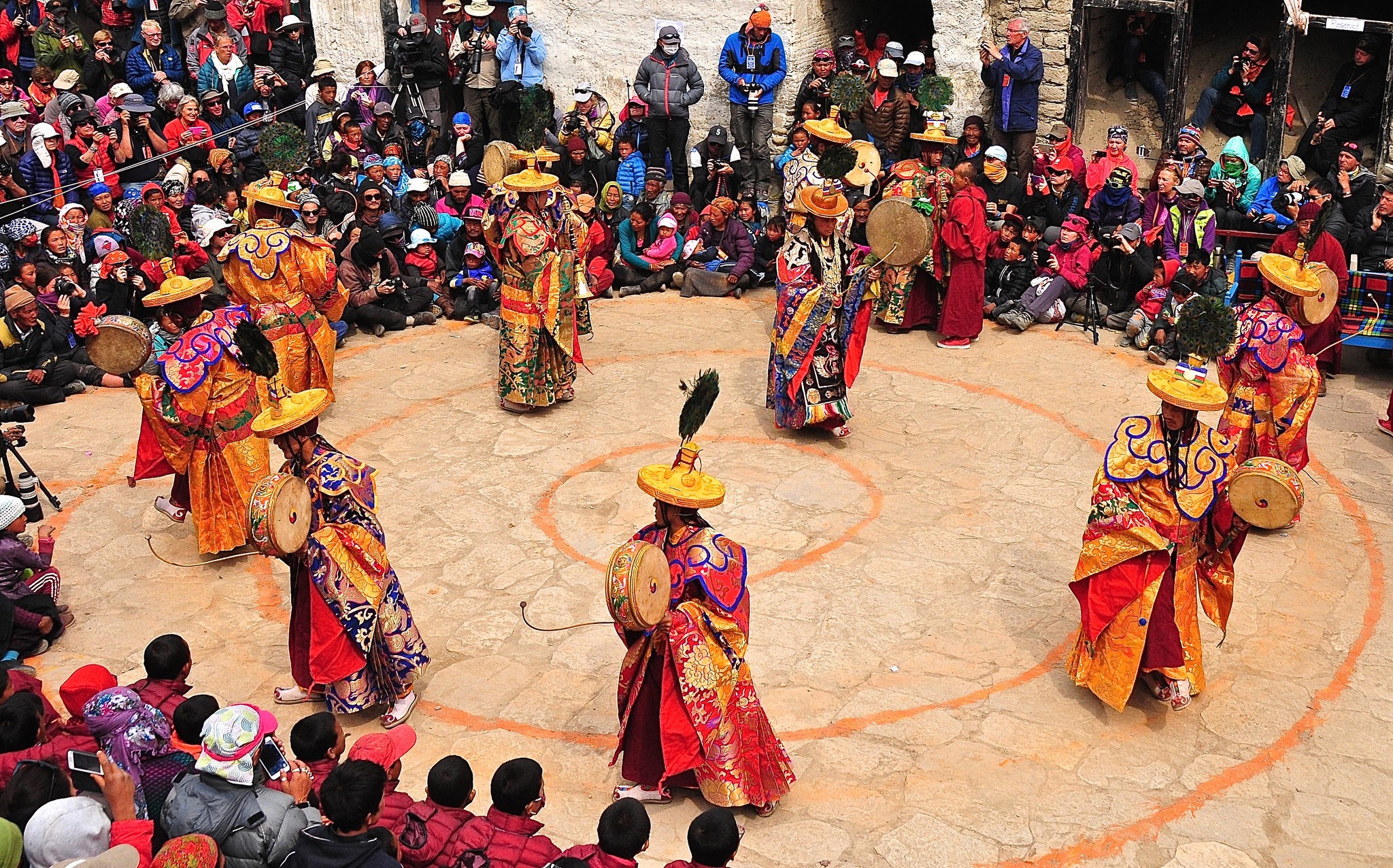 The Tenji (Tiji) festival Trek is in annual event indigenous to lomanthang, Upper Mustang in Nepal. Tenji festival commonly pronounced” Teeji” is the abbreviated from of Tempa chhirim which translates to” prayer for world peace”Tenji commemorates the victory of Buddha’s incarnation.Dhorji sonam over a demon called MA TAM RU TA, who Waxman eater and who caused storms and droughts to destroy people’s houses and livestock. The dance performed by the monks of lomanthang chhyode Gumba during these three days festival enact the harassment of the MA TAM TU TA, the birth of Dhorji sonam the demon’s son and attempt by Dhorji sonam to return and the demon to the Buddha realm. The monks perform a dance called” TSA CHHAM “on the first day of the Tenji and “NGA CHHAM”on the second day.

Tiji Festival influenced by Tibetan Buddhism, which is timed to coincide with the end of the dry season (late winter/spring). The Mustagi people have their own way of family life, which is quite surprising for many outsiders. All the brothers in the family are married to a single girl, what you may call a practice of polyandry.

The high desert region of the Tibetan influence, Kaligandaki, from the Tibetan border south to Kagbeni is generally referred to as Upper Mustang. Explore the thousand years of old monastery, caves, local tribes and scenic beauties of the different landscapes. Make an adventure starting from world’s deepest gorge Kaligandaki Region into world’s highest regions of  Lo-Mangthang Valley that passes through an almost tree-less barren landscape, a steep rocky trail up and down hill and panoramic views of Nilgiri, Annapurna, Dhaulagiri and several other peaks. The trek passes through high peaks, passes, glaciers, and alpine valleys. The thousands years of isolation has kept the culture, lifestyle and heritage remain unchanged for centuries and to this date. The houses in Mustang are mostly made from stone and sun baked mud bricks.

Welcome to Nepal. You will meet our office representative in Tribhuwan International Airport who will help you to transfer to hotel. You can relax in your hotel room in remaining time.

After having early morning breakfast, we will head toward Pokhara on our private vehicle. On the way we will enjoy the great views of diverse landscapes and small villages. We will have lunch on the way. After driving for approximately 6 hours we will reach Pokhara which is very famous as city of lakes.

After taking breakfast, transfer to the airport for a morning flight to Jomsom of 20 minutes over the mountains with views of Annapurna and Dhaulagiri, brings you at Jomsom, the district headquarter of Mustang. Jomsom is also major village on the Kaligandaki area linking the age old trans-Himalayan salt trade route to Tibet. From Jomsom onwards it is very windy in the afternoon, continue on the path on the Kali Gandaki river bed for 3 hours and finally reached Ekle Bhatti village . In Kagbeni a major tributary, Kak Khola coming from Muktinath , meets Mustang Khola from there the river is called the Kali Gandaki . Overnight in Ekle Bhatti .

After doing the formalities of showing your restricted area trekking permit in Kagbeni we start our trekking because in Mustang there is heavy wind which gets up later in the day, blowing dust and sand around. The climb from Kagbeni to Chele passes through beautiful village of Tangbe, which offers white washed traditional houses and fields of barley, buckwheat’s and apple orchards. On the way we enjoy good views of Nilgiri mountain .Passing several ridges we cross a stream after Chhusang village, leave the Kaligandaki valley behind and climb further to the village of Chele. From Chele we start observing the typical Tibetan settlements of Upper Mustang .Overnight in Chele.

After taking breakfast, we start our trek through a forest of small trees and green bushes which are able to survive in the narrow gorge because the high vertical walls keep them cool and sufficiently moist. Soon the valley broadens out and we can see walls built in front of caves which are temporary homes for the herders whose animals graze here. Sometimes it is possible to see the rare blue mountain sheep in this area. After about one hour we are on a pass offering a good view towards Samar, the Kali Gandaki valley and snow-capped peaks in the distance. After Samar we cross a side-valley, descending to its base and crossing over a creek, before we trek all the way up again on the other side. From Samar is a red painted cave monastery, which looks as if it has been stuck on to the vertical wall. This is Rangchyung chorten (the chorten that formed itself’), one of the most sacred places in Mustang. The walk to Shyangboche can seem never-ending. It is fairly easy, but a constant climb with the destination nowhere in sight, until, finally, a cluster of houses appears. It is much colder in Shyangboche. Overnight in Syangboche.

After taking breakfast we start our trekking. Today we pass three high passes with in 15 min. Yanda La, and passed a distinctive red chorten painted with Buddhism’s eight auspicious symbols and terraced valley with groups of yellowish trees appears and above the village of Ghelung are two red Gompas. Unlike other villages in Mustang, where the houses are built close together and look fortress-like, Ghelung is spread out wide on a patch of green grass and gives the impression of being a fairly affluent little community. Rising above the village are barren, brown hills and we can see the Nyi La pass straight ahead. The path descends gradually towards the Ghami La pass and on the way we see a rundown, deserted village downstream. Another broad valley comes in from the left-hand side and in its centre is Ghami, Mustang’s third largest town, which is high above the river and surrounded by fields. Overnight in Ghemi.

We see the Mustang’s longest Mani wall (1000m) long and decorated with simple in well with the surrounding scenery outside the Ghemi. There is also a group of chortens standing in front of the red wall which forms the end of the valley. The architecture here is like carvings, blending organic extension of nature. According to legend when the famous Guru Rinpoche (Padmasambhava) came to the area and fought and destroyed a demon, its intestines landed at the site where the Mani wall stands, its lungs near the red cliffs behind and its heart at the spot where Mustang’s oldest monastery, Lo Gekar, was built. A steady climb takes us up a 3820m pass, after which a lunar-looking desert stretches to the horizon. The first indication of human presence we see next is the Tsarangchorten – the large red-painted Stupa is in the middle of the landscape and further down the monastery and the palace of Tsarang can be distinguished in the fields. A broad road leads to Tsarang, Mustang’s second town. Overnight in Tsarang.

After taking breakfast, trekking begins on flat terrain and the view, apart from a chorten and a few caves, is unrelieved barrenness. After crossing a pass and waking through two rocks forming a natural gate we have finally arrived at Lo Manthang. Overnight in Lo Mangtang.

After taking breakfast, we explore the surrounding areas, visit Namgyal Gompa and Tingkhar. Namgyal Gompa situated on a hill top serves as an important monastery of the local community and also as a local court. After visiting Namgyal Gompa , continue to the Tingkhar, the last main village of northwest of Lo- Mangthang and back to hotel. Overnight in Lo- Mangthang.

We can see dances and celebration, horse racing and giant tug of war. We can see people with Tibetan dress especially women wear traditional dress with colorful jewelry, monks in their robes and dancers in elaborate costumes. Where we are staying this city is old city and founded in 1380 and surrounded by wall, beyond where is not allowed to build home. Evils might harm living behind walls. Today, Bon lama gave a special mantra –prayer, guarding the town We will see Tibetan woman in traditional clothing and King of Mustang wears whole crown. This colorful ceremony exile hungry and evil spirits accompanied by unusual dance of Tibetan lamas. On last Tiji ends with the ceremonial destruction of the evils,

We begin our return journey from Lo Manthang, taking the upper highland route. This highland route offers dramatic views of Lo Manthang and the Charang Valley, with snow clad peaks in the background. Just past the settlement of Lo Gekar, we reach the oldest monastery in Mustang, the GhareGompa. Overnight in Lo Gekar.

We continue our journey on the highland route, crossing alpine meadows before dropping down a steep eroded gully to Dhakmar for lunch. After lunch, we walk through the pretty valley, climb to a ridge and descend from there back to Ghami.

Now we must retrace our route back over the Nyi La to Chhuksang. Overnight in Chuksang.

Take upper part route to Muktinath from where you will have the best breath taking views of surrounding landscape including Kagbeni valley. Muktinath is the most popular both Hindus and Buddhist pilgrimage center. It’s a beautiful Gurung people’s inhabitant and views of Dhaulagiri and Nilgiri is amazing from here. Overnight in Muktinath.

It’s a final day, passing back through beautiful village Jharkot and views of Kagbeni to Jomsom where we end our trek. It’s now time for us to take a nice hot shower. In the evening, you celebrate with your guide and Sherpa and exchange your good experiences what you had on the trekking. Or you can visit Marpha village (near Jomsom), where you can see apple orchids. Overnight in Jomsom.

We take a spectacular early morning flight along the Kali Gandaki gorge to Pokhara and rest of the day relax in Pokhara .This day you be free or if you want you may do Pokhara valley sightseeing in Pokhara – Over night in Pokhara.

Take breakfast at the hotel and then your guide will take you by taxi/car to tourist bus station and then at 7:30AM drive back to Kathmandu.

Today is the final day of your trip. Our office representative will drop you to the Tribhuwan International Airport 3 hours before your scheduled flight. Or, if you have some more days in Nepal and want to join some short tour packages than inform us, we are always here to help you. 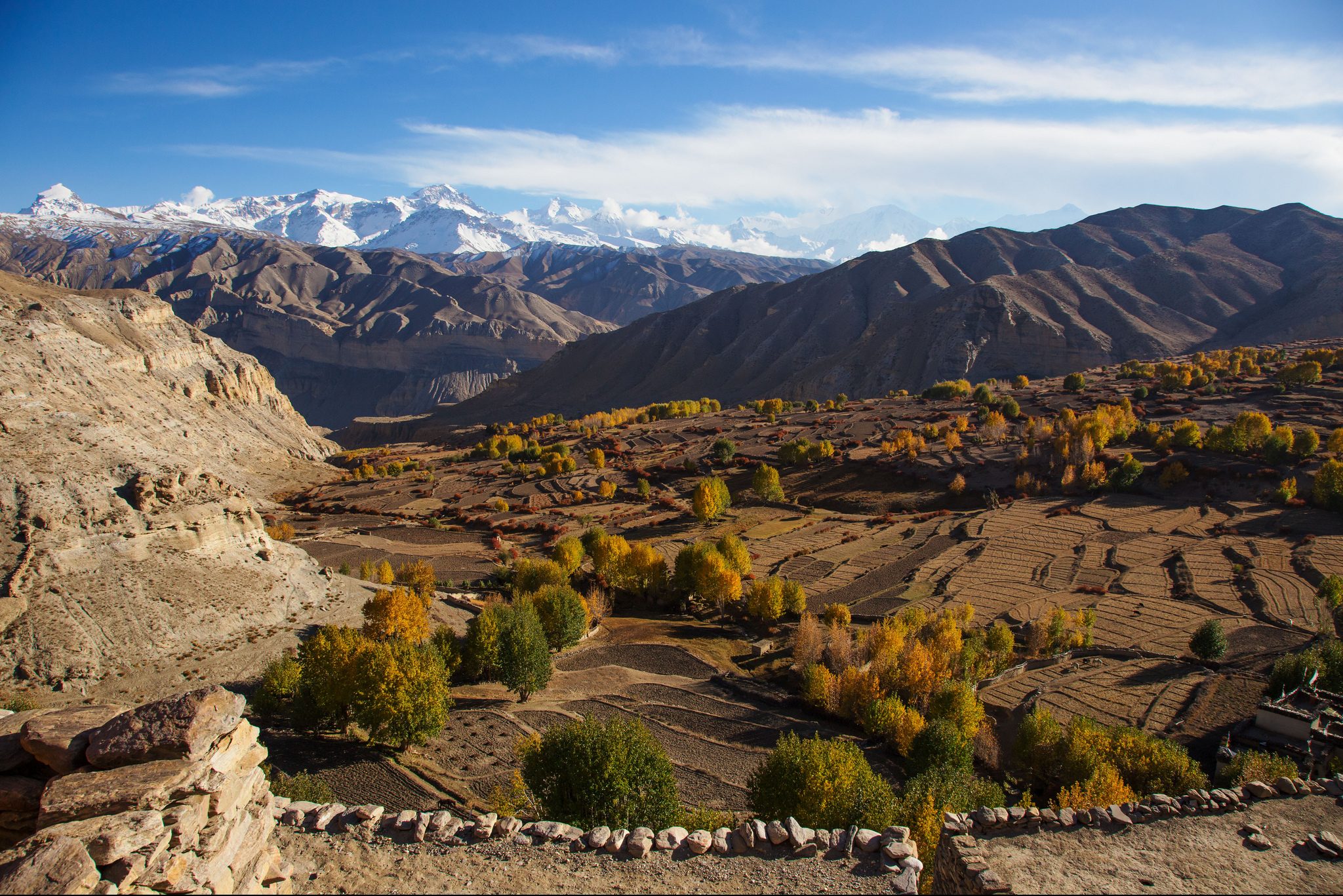 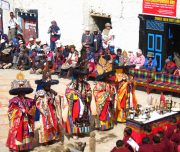 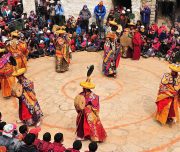 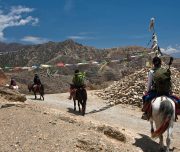 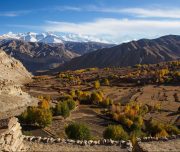